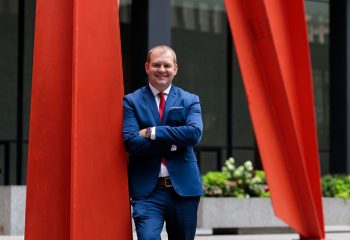 As the son of a union carpenter and a union teacher, Brent Eames grew up with a fundamental understanding of the struggles that ordinary people can face when standing up for their rights against corporations and insurance companies. As a result, Mr. Eames has developed a passion for fighting for people and has dedicated his entire career to exclusively representing injured victims, including all forms of wrongful death, personal injury and workers’ compensation litigation. Mr. Eames is an aggressive trial attorney who has an established track record of securing top-dollar verdicts, awards and settlements on behalf of his clients. This began during his first year of practice, when at the age of 26, Mr. Eames obtained a judgment in LaSalle County for over $1,200,000.00 on behalf of an injured pedestrian who was struck by an automobile at a high rate of speed, causing serious injuries. In the years since, Mr. Eames has countless additional victories to his credit totaling millions of dollars, and he continues to fight for and secure maximum recoveries for his clients across the State of Illinois in both claims for civil personal injury and workers’ compensation.

A large focus of Mr. Eames’s practice is dedicated to the representation of firefighters and police officers who have been injured in the line of duty. In addition to workers’ compensation hearings, Mr. Eames has represented injured firefighters and police officers in their application for disability benefits pursuant to the Illinois Pension Code. For more information, visit our website and blog at IllinoisPoliceandFireLawyer.com.

A native of DeKalb, Illinois, Brent lives in the South Loop of Chicago with his wife, Megan, and his children, Carson and Camryn. Brent is actively involved in his communities, including his alma mater, Northern Illinois University College of Law. Brent serves on the Board of Visitors for the College of Law which seeks to increase awareness of the College’s missions and programs within the Illinois legal community.